Why concertgoers should put their phones away Have you ever gone to see a band you love and found your view obscured by a sea of arms capturing all the magic moments on their smartphones?

So far as we know, no one has researched how many people film concerts, but as live music fans, we reckon it’s often at least half the crowd. Whatever the number, it’s annoying enough that a growing number of people are raising their voices against it, and many musicians, including Adele, Kate Bush and Jack White, have declared outright war on the smartphone.

Initiatives are popping up to reclaim the authentic connection of live music without the ubiquitous phone. One of these is YONDR, which aims to help artists and venues create phone-free spaces. In these spaces, phones are sealed in a lockable pouch that stays with the user inside the phone-free zone. The phone unlocks once you leave the zone, so it is in reach in case of an emergency. According to Grammy.com, Alicia Keys is one artist who has tapped YONDR in a bid to keep her concerts distraction-free.

It’s a controversial topic in a world where every experience is photographed, filmed and shared, and where it sometimes seems that real life doesn’t count if you don’t have hard evidence.

Smartphones at concerts are distracting

While there are some musicians who don’t mind people recording their concerts, the general consensus is that it’s annoying to play to crowds that are constantly looking at their phones. But it’s not just a distraction for the artist. When you’re checking your phone all the time, it’s easy to lose the raw power of the live experience.

“You’d better enjoy real life,
rather than through your camera” – said Adele
to a fan who was recording the whole song. 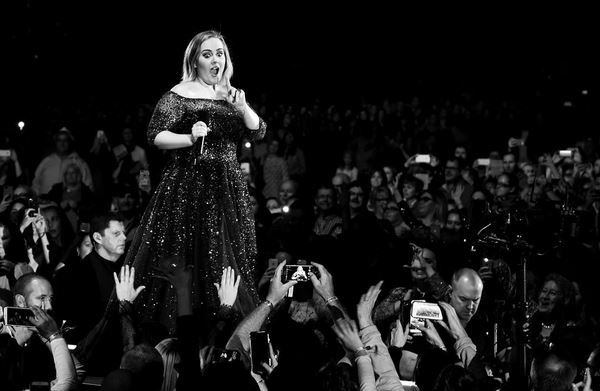 Is it worth recording everything?

What’s the point? Maybe you want to share the experience, but do you really need to record an entire concert and take hundreds of photos? The image quality is likely to be pretty bad (especially since between you and the act there are likely to be hundreds of other phones), and the sound probably won’t be good either. So, unless you’re in the front row with a professional camera and recording equipment, you’re better off leaving it to the professionals.

Holding your phone up for that long is tiring

It takes a lot of physical and mental effort to keep your arm raised in a particular position, to focus on the stage and avoid disturbing the people next to you at the same time. You’re probably also trying to keep your phone safe, as the last thing you want is to have to retrieve it from among all those concertgoers’ feet. And all that energy is energy that you’re not investing in having a good time.

A small screen vs. the real world

What about the reductive visual effect of watching something through a small screen? No matter how fabulous your phone is, what you see through it is a far less rich perspective than what you see without it. Focusing in on that smaller version means you’re missing out on all the nuances of your unencumbered view.

If none of this convinces you to put your phone away and enjoy the music, then all we can say is that next time you’re at a concert and want to film or take photos, use POPSICASE. You’ll be just as distracting, but less likely to drop your phone or get a crick in your neck. Record your prefered song in a concert!